Joseph Willis had turned ninety-five in 1853. He decides to see the sights along the Mississippi River one last time. His swimming the mighty river on a mule-days are long since passed. This time he will travel on the Steamboat Paul Jones from Natchez to Baton Rouge. A cool breeze breaks up the unrelenting sun. Joseph places a wet towel around his neck to relieve the heat.

The steamboat passes another one loaded with convicts. Joseph sits on the main deck next to a seventeen-year-old boy whom the leadsman called Samuel. They both are watching the colossal paddle wheel churning the muddy waters when the boy turns to Joseph. “How do they navigate in these shallow waters? It looks unsafe!”

Before Joseph can answer, the leadsman throws a knotted rope overboard and yells, “Half twain! Quarter twain! M-a-r-k twain!”

“What does that mean, Mister?” The boy crosses his arms while pushing his glasses up.

Samuel waves an offering of thanks to the leadsman. He also opens up to Joseph, explaining how his father died of pneumonia when Samuel was eleven and how he dreamed of being a steamboatman.

“I wasn’t expected to live when I was born. My brother and sister had already died of childhood diseases. Mother said God spared me because He had plans for me. She made me remember Bible verses. I washed that down with Shakespeare and read everything I could. Mother insisted I never throw a card or drink a drop of liquor, although I did occasionally slip off and smoke my corncob pipe.

“I figured no one was perfect. That is, until a late night thunderstorm convinced me that God wanted me to mend my ways, so I put my pipe aside. My righteousness did not last long, for I developed an aversion to slavery. Our local pulpit said it was in the Bible that God approved of it. It was a Holy Institution.

“After seeing a dozen men and women chained together to be shipped down the river, I determined that the church and I worshipped a different God. Those slaves had the saddest faces I’d ever seen, and the slave traders were human devils. My Father never laughed, yet he never was as unhappy as those slaves. It all made me want my dream even more.”

“Tell me about that dream?”

Samuel’s eyes sparkle. “When I was a lad living on the banks of the Mississippi, in Hannibal, I could see the steamboats go up and down the river. I wanted to ride one. One day a big steamer moored up at our little town—this was my chance. After all, I’d already fished away the summer.

“The steamboat advertised it was a ‘lifeboat’—I reckoned that meant it was safe and would provide the time of my life. I reckoned wrong—at least about the safe part! It was the kind of lifeboat that wouldn’t save anybody.

“I became overjoyed to be on a real sure-enough steamboat, enjoying the motion of the swift-moving craft until it commenced to rain. When it rains in the Mississippi country, it rains. The rain drove me to cover. I realized it was not a lifeboat when the rain was almost my demise. I thought I would die as the red-hot cinders from the big stacks came drifting down and stung my legs and feet. Would I ever see my home again?

“For some reason, Mama’s supper came to my mind. I expressed my desire to get off that boat. They put me ashore in Louisiana. I finally made it back home.

“Mister, please excuse me if I was a little edgy when the leadsman yelled mark twain. I thought it meant something bad.”

“Just the opposite, son.” With a slow smile, Joseph assures him they are safe.

Samuel raises his thick eyebrows. “Where you headed?”

“Only as far as Baton Rouge,” Joseph mutters, fanning himself from the heat with one hand. “Seven thousand people have died this year in N’Orleans from the yellow fever epidemic. I want to go to Heaven—but not today. Baton Rouge is far enough.”

“Your story of the lifeboat wrongly advertised reminds me of Louisiana’s Governor Johnson.”

“The good Governor got the great state of Louisiana to build the state prison in Baton Rouge. I’m considering visiting those inmates we passed earlier and tell ‘em about a real lifeboat.”

“What kind of boat is that, Mister?” Samuel gazes at Joseph.

“One built many years ago by a feller named Noah. His boat was mark twain, too—safe from the dangers that lurked in the murky waters below. That boat had no helm, for it was not guided by human hands.”

“I love a good story, Sir. I fancy myself as a storyteller. Would tell me the rest of it?”

“Be glad to. God told Noah He was going to destroy the Earth because of its wickedness. But, God was also going to provide a way of protection from His judgment. The Lord told Noah to build a boat—a boat of safety, if you will. The Good Book says Noah found grace in the eyes of the Lord. That was the first time that word appeared in the Bible. Noah received the unmerited favor of God. Grace provided deliverance from the Lord’s judgment.

“Now there was a lot to be done. The Lord told Noah to build the boat out of gopher wood. We call it cypress in Louisiana. It will not rot in our lifetime.

“’Put pitch on the inside and outside too,’ the Lord insisted. The word pitch in the Hebrew means atonement. We need to be in Jesus just as Noah needed to be in that boat. As the storms of God’s wrath beat upon the ship, the winds of God’s wrath would later beat upon the Lord Jesus. If we are on the inside, not one drop of judgment can come through. We are sealed with that atoning pitch—Christ’s atoning blood.

“It took Noah more than 100 years to build it. It takes a lot of faith in the Lord’s promise to do that. The boat was built like an ancient coffin. There was no steamboat pilot to guide it—only God.

“The Lord gave precise instructions. ‘Set the door of the boat in its side.’ There was only one door to pass through to escape God’s judgment. Jesus is that one door.

“By faith, Noah and his family entered the boat. Once they were all inside, the Lord shut the door. God sealed the door—not Noah. ‘Put a window in the top of the boat, Noah, so you can look to Heaven for all your needs.’

“God had Noah build rooms in the boat. There is a room for me. There is room for you—for the asking.

“Noah’s boat floated many days. It finally landed on Mount Ararat on the seventeenth day of the seventh month. That’s our April 17th—the same day Jesus rose from the grave. Noah went into the boat with little, but when he came out, the entire world was his.”

“What is your name, Mister?”

“You should be a preacher.”

“I reckon Heaven goes by favor.” Samuel exhales. “If it went by merit, we would stay out, and our dogs would go in.”

“That’s a clever way to put it. You should be a writer.”

Joseph Willis died in 1854, at age ninety-six in his beloved Louisiana. Forever in the ark of salvation—Christ.

Destiny is a powerful epic with love stories, battles, testimonies, drama, politics, history, and even humor. 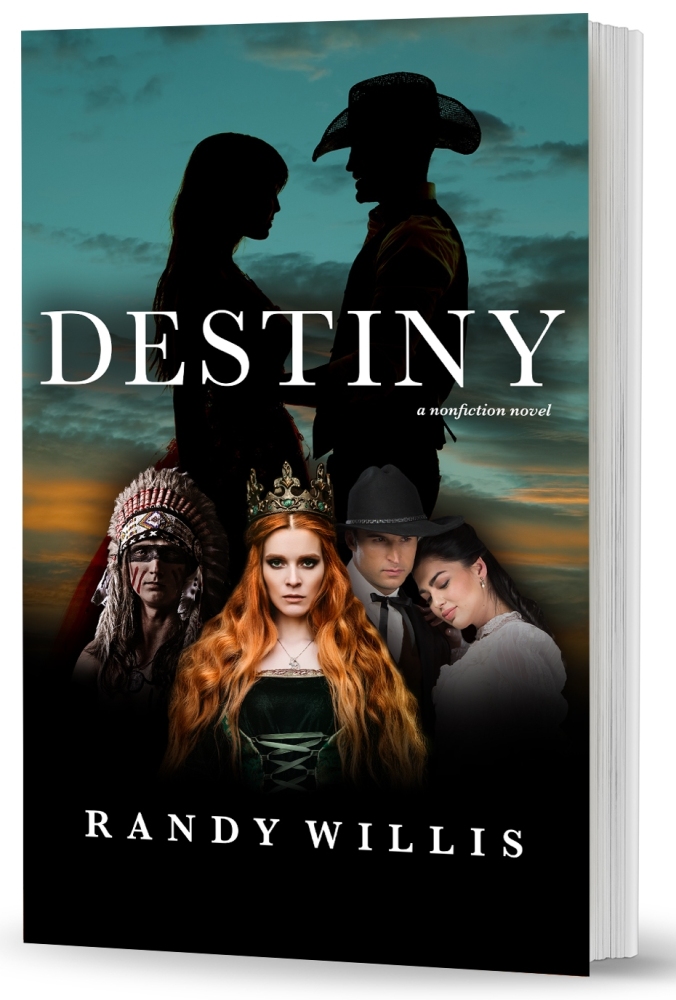