About Destiny and In Appreciation

Destiny is a sweeping family saga that spans four centuries. It begins and ends on Christmas Day, in 1941, at the Ole Willis Place, located on Barber Creek near Longleaf, Louisiana.

The Ole Willis Place was located on present-day Willis Gunter Road, off Boy Scout Road. There are a huge gravel pit and sand dunes next to where the house once stood.

Destiny is the story of two great nations and my ancestor’s struggle from tyranny—religious and political.

Destiny is more than a novel. It is a nonfiction novel inspired by true stories handed down by my ancestors. They depict real historical figures and actual events woven together with imaginary conversations with the use of the storytelling techniques of fiction. Truman Capote claimed to have invented this genre with his book In Cold Blood in 1965.

I’m thankful to the many people that encouraged me to write our family’s history. My first-cousin, Donnie Willis, planted the first seed in my mind to write about our 4th Great-Grandfather, Joseph Willis. Donnie has been pastor of Fenton Baptist Church in Fenton, Louisiana, for 50 years.

I’m also thankful to my sainted grandmother, Lillie Hanks Willis. She had a treasure chest of stories about Joseph Willis and insisted I write them down.

My Uncle Howard Willis was our family’s master storyteller when I was younger. I sat for many hours mesmerized by him. His granddaughter and my cousin Kimberly Willis Holt was inspired by him too. She is a National Book Award Winner, author of When Zachary Beaver Came to Town, My Louisiana Sky, and the Piper Reed series. When Zachary Beaver Came to Town and My Louisiana Sky were adapted as films of the same names.

I’m thankful to my late cousin, and the maternal great-grandson of Joseph Willis, Dr. Greene Wallace Strother. His uncle Polk Willis and Aunt Olive Willis tended to Joseph Willis in his final years, and they shared all that Joseph told them. Dr. Strother gave his vast research to me in 1980. He served as chaplain to General Claire Chennault’s “Flying Tigers” while in China as a missionary. He was a Southern Baptist missionary emeritus to China and Malaysia.

Dr. Eakin is best known for documenting, annotating, and reviving interest in Solomon Northup’s 1853 book Twelve Years a Slave. She, at the age of eighteen, rediscovered a long-forgotten copy of Solomon Northup’s book, on the shelves of a bookstore, near the LSU campus, in Baton Rouge. The bookstore owner sold it to her for only 25 cents. In 2013, 12 Years a Slave won the Academy Award for Best Picture. In his acceptance speech for the honor, director Steve McQueen thanked Dr. Eakin: “I’d like to thank this amazing historian, Sue Eakin, whose life, she gave her life’s work to preserving Solomon’s book.”

And above all, I am thankful to the Good Lord. He has given me wells I did not dig, and vineyards I did not plant.

“Preach Christ at all times. When necessary,
use words.” —St Francis of Assisi

Randy Willis is an American novelist, rancher, and music publisher.

He is the author of Destiny, Beckoning Candle, Twice a Slave, Three Winds Blowing, Louisiana Wind, The Apostle to the Opelousas, The Story of Joseph Willis and many articles.

Twice a Slave has been chosen as a Jerry B. Jenkins Select Book, along with four bestselling authors. Jerry Jenkins is the author of more than 180 books with sales of more than 70 million copies, including the best-selling Left Behind series.

Randy Willis was born in Oakdale, Louisiana, and lived as a boy, near Longleaf, Louisiana, on Barber Creek. He currently resides in the Texas Hill Country.

Randy Willis is the fourth great-grandson of Joseph Willis and his foremost historian.

To learn more about the author and
the characters in this book visit:
http://www.threewindsblowing.com

And Amazon Kindle at 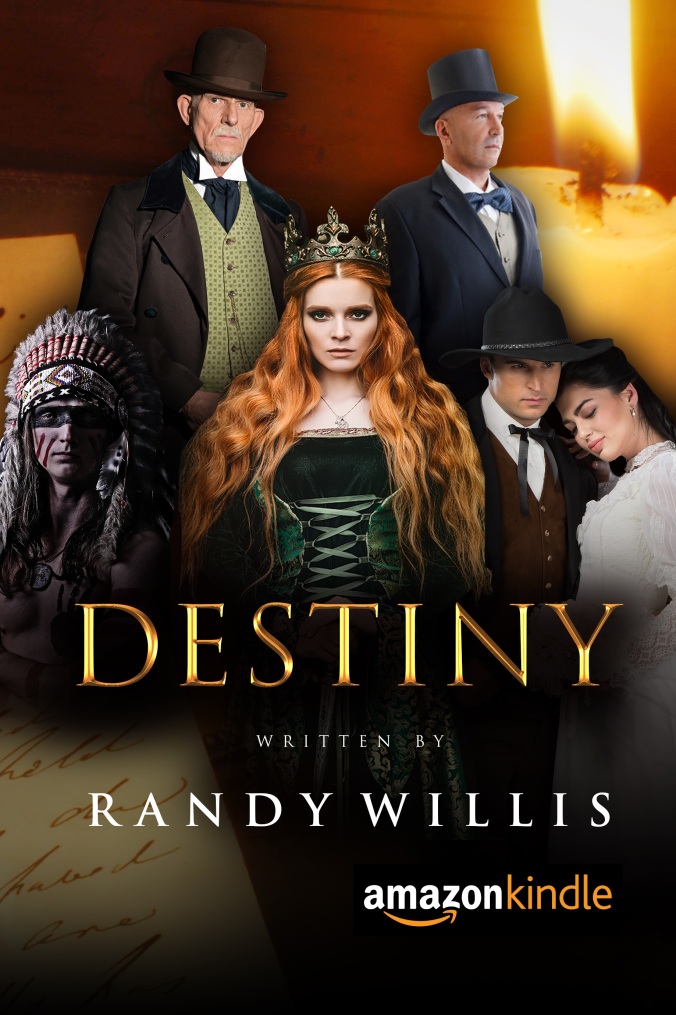 Destiny is now available on Amazon Kindle for only $2.99

For one week only

Destiny is now available on Amazon Kindle for only $2.99

For one week only