When I was a boy one of my heroes was the man standing to the right of President John F. Kennedy.  I had a gracious letter that he had written to my mother after her first husband had prematurely died. When I entered the entertainment business there were only two famous people, in that world (there were many in the sport’s world) that I wanted to meet. One was Roy Rogers and the other was him. Years later I was invited by a friend, who was his band leader at the time, to meet him in his home.  ~ Randy Willis 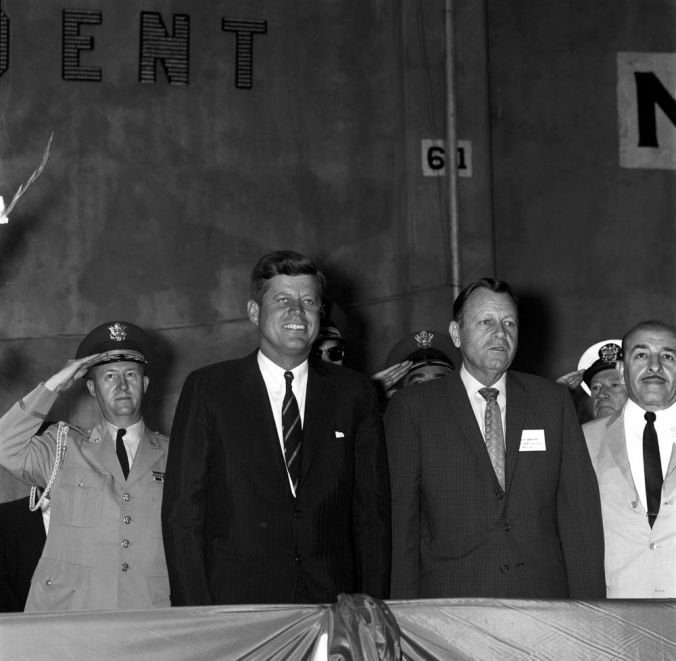 The wrote this about him. Without Louisiana College there might not have been “Sunshine.”

Perhaps I should explain in more detail.  Without Louisiana College there may never have been the classic hit song “You Are My Sunshine. ”

The year was 1920.  The son of a poor sharecropper from the now-ghost town of Beech Springs in north Louisiana decided he wanted to get an education. His family was so poor that he did not have a bed in which to sleep until he was nine years old.

Upon graduation from high school, he began the task of choosing a college.   One of his neighbors had something called a college catalogue.  Later he would recall, “I was amazed and believed you could order a college just as you ordered something from Sears. I’d never seen a college, had never been on a college campus, but I read it and it told all about Louisiana College at Pineville. I decided that’s where I would try to go.”  The college had been established just fourteen years before in 1906.

But how could he pay for tuition, books, housing, and food?  He didn’t have any money or know anyone that did. He decided to try and get a job at the college.  On his second day on campus he went to the college employment office and found a job in the soon to be named Hattie B. Strother Cafeteria.  Hattie was the beloved Dean of Women of Louisiana College.  She would serve as Dean of Women for 21 years. Hattie Strother’s  maternal great-grandfather, Joseph Willis, had preached the first sermon by an Evangelical West of the Mississippi River, but it would be a decision by her brother that would forever change Louisiana history.

Hattie’s brother, Willie Strother,  was a history professor at Louisiana College.  He would teach there for 35 years.  The young sharecropper’s son would attend his classes.  He wished to get his degree in history.  It would also be during the student’s freshman year that a classmate of his and Willie and Hattie’s brother, Harry Winfield Strother, would die from injuries in a football game at Louisiana College.

After acquiring the job in the cafeteria he joined the glee club. Professor Dunwoody soon assigned him to the college quartet. He sang lead. About the same time he received a gift, a used guitar. He taught himself how to play it. As winter approached he became desperate for money. With his guitar, he began to sing on the street corners in Alexandria. When an officer would tell him to move on he would move to another street corner.

But none of this would have happened had it not been for two encounters on the campus of Louisiana College.  In his third year of college Jimmie simply just did not have the money to continue. He tried banks for a loan. They all turned him down. Later, he would write, “Everyone ought to be hungry and try to borrow money at least once in their life. To be broke and turned down, well, it’s something.”

With his dreams put on hold the college boy found himself in back of a mule again, plowing and picking cotton from sunup to sundown . Jimmie made $75 and supplemented that by slipping back into Alexandria and singing on street corners. After one year in the cotton fields he was able to return to Louisiana College and obtain his degree in history when Willie Strother loaned him $120 (the equivalent of $1,500 today).

But, there would be yet another encounter on the campus of Louisiana College that would have a greater impact on Jimmie’s life.   While walking across campus a man introduced himself to Jimmie. The stranger was striking looking, well dressed, and friendly.  Jimmie said, “At first we talked about football and baseball.”   He was the son of a sharecropper too.

Then he began to ask Jimmie questions and explained who he was. “I’m Robert G. Lee .  I’m holding a revival in Pineville tonight and you’re invited.”  Dr. Lee had served as pastor of First Baptist Church of New Orleans for four years.   The bold and future three time president of the Southern Baptist Convention (and future pastor of Bellevue Baptist Church in Memphis) added, “Jimmie, can I ask you something? If the Lord would call you today, would you be ready to go.” Jimmie replied, “Dr. Lee, I hope He doesn’t call me today because I don’t think I could make it.”  Dr. Lee replied, “The Lord’s been good to you, and it’s something you ought to think about.” He closed by saying, “I hope you’ll come to church tonight.”

Jimmie continued, “That night I went to church. Dr Lee gave one of his most famous and beloved sermons,  Pay Day, Some Day.  There’s no doubt of it, the man had the finest command of the English language that I have ever heard. Before he had finished, I was ready to go down the aisle. And when he gave the invitation, I was the first one down and made public my profession of faith and united with that church.”  Willie Strother was there. He was a deacon in the church.

Jimmie would write of his beloved college, “Every man needs God as a partner because you can’t make it by yourself. I knew it was my duty to try and contribute something to life, not just take from it, and I determined to try to be a better citizen. I believe that was the most important thing I learned at Louisiana College.”

Jimmie Davis would go on to change Louisiana history and impact the lives of thousands through his music and life. In 1999, “You Are My Sunshine” was honored with a Grammy Hall of Fame Award and the Recording Industry Association of America named it one of the Songs of the Century.

“You Are My Sunshine,” was designated an official state song of Louisiana in 1977.

The Sunshine Bridge was completed in 1963 over the Mississippi River between Baton Rouge and New Orleans. Governor Davis named it after his signature song. His horse was also named Sunshine.

Governor Davis died in his sleep peacefully at his Baton Rouge home on November 5, 2000. He was 101 years old and had continued to make public appearances until a few months before his passing.

Bibliography: Jimmie Davis’s papers can be found at the Louisiana State Archives, in Baton Rouge, Louisiana. An obituary appears in the New York Times, 6 Nov. 2000. An uncritical biography is Gus Weill’s You Are My Sunshine: The Jimmie Davis Story, an Affectionate Biography (1977). Davis’s first term of governor is well covered in Jerry Purvis Sanson’s Louisiana during World War II: Politics and Society, 1939-1945 (1999).

Randy Willis is the author of Twice a Slave, Three Winds Blowing, Louisiana Wind, The Apostle to the Opelousas, The Story of Joseph Willis, and many magazine and newspaper articles.
Coming soon: Beckoning Candle and a series of Children’s Storybooks beginning with Ole Sally Swims the Mighty Mississippi.

Twice a Slave has been chosen as a Jerry B. Jenkins Select Book, along with four bestselling authors. Jerry Jenkins is author of more than 180 books with sales of more than 70 million copies, including the best-selling Left Behind series.

Twice a Slave has also been adapted into a dramatic play (vimeo.com/99360694) and (https://youtu.be/8hMLYDQglkc) at Louisiana College, by Dr. D. “Pete” Richardson (Associate Professor of Theater with Louisiana College).

He was born in Oakdale, Louisiana. He lived on Barber Creek, between Forest Hill and Longleaf, Louisiana, as a boy. He currently resides in the Texas Hill Country.

He is single and the father of three sons and has four grandchildren. All of his books are dedicated to them by name.
Randy Willis is a fourth great-grandson of Joseph Willis, and his foremost historian.